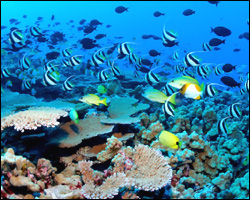 A Reef Off St. Kitts – Nevis

St. Kitts and Nevis is to benefit from a World Bank’s Global Environment Facility (GEF) US$8.75 million grant to ensure the long-term conservation and sustainable management of fragile marine ecosystems in the Eastern Caribbean, including the protection of over 100,000 hectares of marine habitat.

Permanent Secretary in the Ministry of Sustainable Development, Mrs. Hilary Hazel has confirmed that St. Kitts and Nevis had made a formal application for funding.

According to a release from the GEF, the Sustainable Financing and Management of Eastern Caribbean Marine Ecosystem Project makes the funds available to the four other countries  – Antigua and Barbuda, Grenada, St. Lucia and St. Vincent and the Grenadines.

“The trust funds will provide reliable and consistent sources of funding for biodiversity preservation. It will also promote collaboration among participating countries (including governments, communities, NGOs, and the private sector) to facilitate marine and coastal conservation, protect near shore areas, and support a regional minitoring and information network.

“This initiative is part of a larger regional effort called the Caribbean Challenge launched in 2008 by the Caribbean countries, which seeks to legally protect 20 percent of near shore areas by 2020.”

The Eastern Caribbean is considered to be among the top five global biodiversity hot spots in the world due to its marine and coastal ecosystems.

These countries rely heavily on the tourism sector and the marine environment is considered to be overexploited and under-protected. Key threats already identified include increases in exotic invasive species, poorly planned and regulated coastal development, solid and liquid waste dumping by cruise ships/hotels/resorts, and unsustainable extraction of natural resources such as overfishing and sand harvesting for construction.