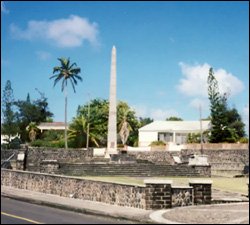 St. Kitts and Nevis on Sunday, remembered its nationals who fought and died in the two World Wars.

The traditional National Day of Remembrance to those who gave their lives in World War I from 1912 to 1918 and World War 11 from 1939 to 1945 was observed with the Laying of Wreaths at the War Memorial or Cenotaph on the Bay Road.

The Service commenced following the arrival of His Excellency the Governor General Dr. Dir Cuthbert Sebastian and Prime Minister Hon. Dr. Denzil L. Douglas and the firing of a gun signaling the observance of two minutes silence and the playing of The Last Post.

“They shall not grow old, as we that are left grow old; Age shall not weary them nor the years condemn, At the going down of the sun and in the morning, We shall remember them,” read the President of the Ex-Servicemen’s Legion.

“We are met together to memorialise with gratitude those brave men who gave their lives for justice, peace and truth in the two great wars of 1914 ““ 1918 and 1939 to 1945.  Their death is not a loss, but a final offering of their lives to Almighty God in the service of mankind,” said the Salvation Army representative.

Representatives of the St. Kitts Evangelical Association, the Methodist Church and the Catholic Church also participated.

Chaplain Leroy Benjamin read the names of the brave men from St. Kitts and Nevis “who fought so gallantly for their country.”

After the laying of the wreaths, Governor General Sebastian, Prime Minister Douglas and officials greeted the war veterans.

Following the departure of His Excellency, Prime Minister Douglas took the salute at the March Past from the armed and unarmed units on parade.