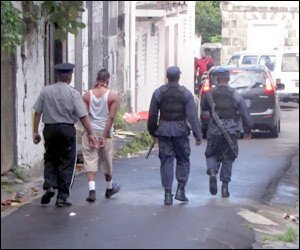 Police Cleaning Up The Streets

Details of the Royal St. Christopher and Nevis Police Force’s six-point plan to enhance public safety was shared with residents on Wednesday (July 15) by the Prime Minister and Minister of National Security Dr. the Honourable Timothy Harris.

Collaboration with Other Agencies will see closer partnerships with the judiciary to reduce prosecution delays. The Ministries of Health, Education and Social Services as well as the Department of Public Works will be engaged to ensure matters related to their field that impact public safety such as truancy are addressed.  Engagement of Stakeholders focuses mainly on communities around St. Kitts and Nevis, forging relations with non-governmental agencies, encouraging neighborhood watches and having regular media appearances to update the public. Under Administration, performance appraisals for all ranks will be reviewed, best practices from other organizations adopted and revision of applicable laws, regulations and Standing Orders within the force.

“This represents an action plan to reduce homicides and violent crimes in the federation,” Prime Minister Harris stressed, adding that the cabinet of ministers has reviewed and given unanimous support to the strategy. “The plan is being backed by resources. It is not a plan that we say put up and wait for the next budget. Whatever exigencies there are of state in relation to this plan, we will ensure that the resources are being made available to ensure effective implementation.”

That commitment was recently demonstrated when a request was made by law enforcement to acquire a microscope to be used for forensic investigations. The price tag was close to half a million dollars and its purchase was not covered in the budget. The cabinet acted promptly to approve the necessary funds.

“Not a day is to be wasted in terms of the fight and the commitment of this government to this matter of crime because we recognize that we are at a critical stage and the sooner we act the better,” emphasized the Prime Minister.

The six-point plan will buttress the increased actions of the police which in the past weeks have seen a number of stop and searches, abandon lots and derelict vehicle searches, and other security-related operations. The activities recorded a number of successes that has resulted in several arrests.