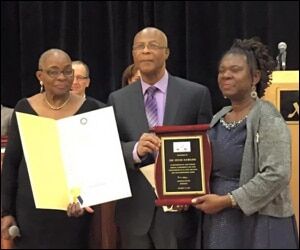 Prime Minister, Dr. the Honourable Timothy Harris lauded four honorees from St. Kitts and Nevis for their contribution to the Federation, during the 17th Hearts and Hands for Nevis Luncheon in New York, U.S.A. on Sunday, January 17.

“We are mindful of their sacrifices, their contributions and their respective successes and we applaud them,” said the prime minister, while noting that one must not lose sight of the fact that the small size of Nevis did not prevent its sons and daughters from reaching the zenith.

“Today, Sunday, January 17, 2016, is an opportunity to celebrate them,” said Dr. Harris. “From the tireless, energetic spirit of Dr. Violet Jeffers to the awe inspiring work of Dr. Leslie Wade, the financial and economic expertise of Dr. Everson Hull, and the legal acumen of Sir Hugh Rawlins, our nation reels with collective pride at the celebration of four of our sons and daughters.”

Prime Minister Harris went on to deliver a brief history on the distinguished honorees.

“Dr. Hull graduated from the halls of the Charlestown Secondary School to serve as the Permanent Representative for St. Kitts and Nevis to the OAS, an achievement marked by a myriad of successes in private and public enterprise along the way. We move to the beat of his financial and economic expertise, a field he has been committed to all his life. His successes are ours also.”

He explained that Dr. Leslie Wade’s service to the nation and the world is symbolic. “Today, she is that link between peace and development serving as Director of the UN’s Department of Economic and Social Affairs. Each of us can learn from this brilliant mind which makes decisions daily in the interest of devising policies that impact the United Nations and the world.”

Prime Minister Harris described Sir Hugh Rawlins as a man who has climbed the heights of legal excellence, paving a legacy deemed attainable by only a few. Dr. Harris applauds Sir Hugh Rawlins many accomplishments, as he presently serves as a judge of the International Labour Organization (ILO) International (Appellate) Administrative Tribunal in Switzerland. He added that he continues in his capacity to use the legal foundation he acquired to train young minds and lead countless others to the well of wisdom from which he has so successfully gleaned.

“Our recognition of their success does more than laud their accomplishments,” said Dr. Harris, while adding that precedence has been set for the Federation’s youth both home and abroad to strive toward excellence. “Today’s high achievers are models who are also dedicated to positively impacting the lives of others through excellence and service.”

Prime Minister Harris stated that this year’s annual luncheon was prestigious as it comes at a symbolic time for his administration, “on the cusp of realizing the one year anniversary of service to citizens of the Federation of St. Kitts and Nevis at home and abroad.”