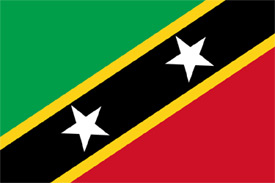 Family outreach and reintegration into society will be two of the main services offered at the St. Kitts and Nevis Coed Rehabilitation Center, when it is opened in 2009.

The center is one component of Government’s Child Development Project (CDP) which seeks to improve the status of children at risk by supporting programmes of early detection and remediation of behavioural and learning difficulties as well as rehabilitative care for persons who have committed offenses.

Appearing on this week’s edition of the SKNIS radio magazine programme, Perspectives, Ian “˜Patches’ Liburd, Permanent Secretary in the Ministry of Social Development, noted that the new juvenile center will offer a second chance to young men and women.

“The rehabilitation center is designed to house 20 boys and 10 girls and will provide quality treatment and child development services including counseling,” Liburd said.

The center will be located at Harris’ Village and will be placed on a 3.1 acre lot. Funding for construction was secured from the Caribbean Development Bank at an approximate cost of $5.2 million. The work will be undertaken by Stephen and Associates Ltd. and is expected to be completed in one year.

Mr. Liburd explained that the facility will greatly differ from its predecessor, the Harris’ Home for Boys, which was destroyed by fire in the 1990s. More focus will be placed on rehabilitation rather than punishment. Additionally, under the CDP there will be training opportunities for 138 teachers in various areas including basic psychology, human development and counseling over a two year period.

There are also plans to introduce courses in counseling and behaviour management for teachers being trained at the Clarence Fitzroy Bryant College, while child protection, probate and other officers of the Court will also undergo similar training.

Permanent Secretary Liburd stated that the CDP is “extremely relevant to the social and economic thrust of St. Kitts and Nevis” as it targets a core age group of the population. “We intend to be more proactive instead of reactive,” he stressed, adding that greater partnerships are needed in this area. “All stakeholders have a role to play. Juvenile problems affect all of us.”

“Many youth lack basic competencies and family systems, and are isolated and feared by their home communities so “¦ any assistance we can get “¦ will redound to the benefit of the entire country,” the Government official concluded.