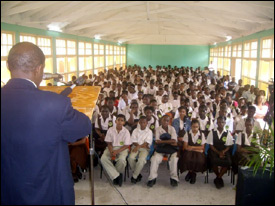 St. Kitts and Nevis Prime Minister Hon. Dr. Denzil L. Douglas message to the students of the Charlestown Secondary School and the Gingerland Secondary School in Nevis was similar to that given to schools on St. Kitts.

“Shun the challenges that we face from those who encourage you to get into gangs and behave badly, committing crime and becoming violent, you can only prepare yourself properly to be productive citizens and for leadership if you will shun the negative things that can lead to your personal destruction and the overall collective destruction of our country.”

His visit to both schools on the sister island was one of several activities that marked the twin-island Federation’s 25th Anniversary of Independence which is being observed with the theme: “Pride, Development, Progress – INDEPENDENCE – 25 years of Success.”

“What role must you must play if you are going to sustain that independence for future generations after you. What role must you play today and how must you prepare yourself if you are to sustain what we have achieved for the next generation, for the next 25 years,” the Prime Minister told Charlestown Secondary School Fifth and Sixth Formers and the entire student body of the Gingerland Secondary School.

“How can you ensure that the generations that will come after you in the next 25 years would be able to look back on the work that Mr. Simeon Daniel, Mr. Ivor Stevens, Mr. Uhral Swanston, Mr. Vance Amory, Mr. Joseph Parry and all who have built Nevis to what it is today and those who have built also on the island of St. Kitts. How can you, 25 years from now be certain that the students sitting in this Hall will be able to say, “˜We have had Pride, Development and Progress and that means our independence has been one of success,” asked Dr. Douglas, who was accompanied by Nevis Premier, Hon. Joseph Parry.

Prime Minister Douglas pointed out that the next 25 years of sustaining the pride, development, progress and success of St. Kitts and Nevis depends on the students.

“You who must become the role models of those who will come after you. You who are sitting here today”¦ will in the future standing where I am now and will be giving the address of future independence celebrations that we are giving today. How many of you realise that this will be your duty and responsibility 25 years or less from now?” asked Dr. Douglas.

He stated that for the progress, development and success to be sustained, the students in St. Kitts and Nevis must make use of the opportunities that are being provided today.

“You must make sure that you grasp the opportunities in what is being provided for you to learn and prepare your minds so that you would be able with pride and dignity to take on the challenge of leadership that you must take on in the future,” said the St. Kitts and Nevis leader.

He advised that this can only be achieved by the youth being disciplined, orderly and focused on “that which is right and good and focus on the teachings of Christ and the Almighty.”

“You must prepare yourselves today and you can only prepare yourself adequately if you are discipline, focused, shun the distractions that are plaguing our society today ““ if you shun the challenges that we face from those who encourage you to get into gangs and behave badly, committing crime and becoming violent; you can only prepare yourself properly to be productive citizens and for leadership, if you will shun the negative things that can lead to your personal destruction and the overall collective destruction of our country,” said Prime Minister Douglas.

“The challenge that I leave with you is that the independence that we celebrate here today needs to be celebrated 25 years from now and you need to think as to what the students 25 years from now would be saying about our independence 50 years from its attainment. Would they be describing it as a moment of “Pride, Development, Progress ““ 50 years of success? To a large extent that question will be answered appropriately by what you do with your opportunities that you are being provided here in Nevis and in St. Kitts and Nevis in general,” said Prime Minister Douglas.

He said that the theme tells the story that Kittitians and Nevisians are a proud people who have been able to engender that pride within themselves and which has to be sustained in the future if nationals are to live up to what is meant by being politically independent.

“It tells us as well that there is a tremendous amount of development that has taken place ““ development and progress ““ development in terms of the physical infrastructure that we have seen to build our country and provide us with the necessary support that is required if we are going to be able to sustain our political independence. It is as a result of the built environment ““ the infrastructure ““ the schools ““ the network of roads ““ the hotels ““ the various institutions that have been established and which continue to be used in support of our independence,” the Prime Minister said.

He said it was as a result of the attention that has been given to the physical environment, being conscious that if it is destroyed the environment would not be able to sustain the independence for the future.