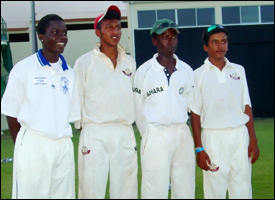 A twenty-seven member cricket team including 16 officials out of Canada was the latest to visit the Federation on a July 2 to 10 tour.

Brian Hale, President and Coach of the Toronto Cricket Academy gave some insight on his team stating that he founded the institution in 1990. They started international tours in 2000 and have visited several territories including California, Lancashire, Somerset, Guyana, Trinidad and Barbados.

When asked about his impression of Warner Park, he said that the facility has to be rated as “one of the finest in this region.” “I like it because it suits the island “¦ and it’s properly maintained. I think this is the pride of the island,” he stressed.

Having visited 20 years ago to represent his country in a cricket match against the Windward Islands, Hale stated that has been a tremendous difference.

“The difference is improvement. The island has now become exceptionally pretty and I guess it’s because of the mountains behind it,” he explained, noting the number of developments that have blended into the landscape of the island. “It just seems to have a very aesthetic look about it,” said Mr. Hale.

Also impressive was the level of talent of the high school students the touring team played against. He said that this was very important to them as it serves as a good test to measure the development of his players.

The sporting facilities also were commended by President Hale, who added that every need was met on the tour.

In concluding, Mr. Hale expressed thanks to the people of St. Kitts and Nevis for their hospitality and further stated that he is interested in  competing in the Ministry of Sports organized Under 13 Cricket Invitational tournament slated for August 2009.