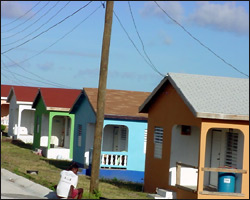 Government’s expansion of the NEMA Starter homes and provision of housing to former sugar workers continue.

This has been disclosed by the Federal Minister of Housing, Hon. Cedric Liburd.

Updating the Cabinet during its meeting on Monday, Minister Liburd reported that the project to upgrade the NEMA starter homes is well underway.

“Phase One of that project should be fully completed by the end of July 2008,” said Minister Liburd.

Minister Liburd also informed Cabinet, which met under the Chairmanship of Prime Minister Hon. Dr. Denzil L. Douglas, on the former SSMC Workers Housing Project, which is geared towards assisting former sugar workers who do not yet own their own home, in acquiring homes.

Since taking office in July 1995, the governing St. Kitts – Nevis Labour Government has constructed over 2,000 homes under various housing programmes compared to 296 built by the People’s Action Movement Administration in its 15-year reign from February 1980 to June 1995.