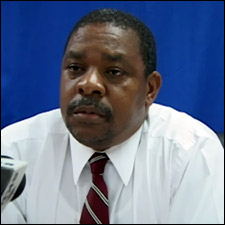 Permanent Secretary in the Ministry of Health Elvis Newton has called on youth groups to tap the resources of his Ministry and join the fight against HIV/AIDS.

The invitation was made at the media launch for “The More You Know” which is being implemented by the CARICOM Youth Ambassadors in St. Kitts and Nevis. Mr. Newton said that the Government and the World Bank has partnered to offer US $4 million to fund HIV/AIDS related projects and he is confident that the capabilities of young people has been sufficiently built to develop effective ways to combat the spread of the pandemic.

The Permanent Secretary referred to “The More You Know” project ““ which was developed by young people and uses a PSA and television game show to reach the population ““ and noted that it complements the strategy of the national AIDS effort.

“As we speak, the Ministry of Health and our partners have engaged in a very ambitious [campaign] to increase testing amongst the general population,” he said, noting that several community testing days have been held recently. “That is one of the things that really attracted us to funding the project because we felt that emphasis on encouraging people to know their status by having a test done is an integral component of our national response.”

The prevention aspect of the project was also appealing to officials.

Mr. Newton revealed that his Ministry was also working with young people on another innovative project to create animations which address various HIV/AIDS related topics such as prevention, stigma and discrimination and mother to child transmission. The animations will be uploaded to the popular video sharing website Youtube. The government official also encouraged members of the media to partner more with his Ministry in the national response to the pandemic.