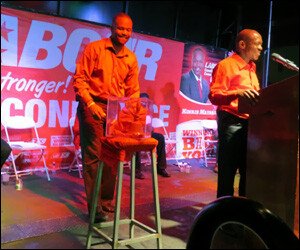 The crowds attending political meetings of the St. Kitts – Nevis Labour Party have their eyes on the bell.

The Federation’s Prime Minister, the Right Hon. Dr. Denzil L. Douglas stated at a massive meeting in Lime Kiln, West Basseterre last Sunday night that the date for the next general election will be announced when the bell appears for the third time.

On Thursday shortly after the Prime Minister arrived, the bell was placed on the platform for the second time at the Pond’s Pasture, East Basseterre meeting attended by another massive crowd.