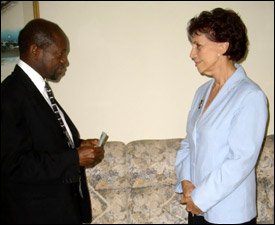 All the Kittitian and Nevisian students in Cuba are safe.

This was confirmed by the Resident Cuban Ambassador to the Federation of St. Kitts and Nevis, Her Excellency Ana Maria Gonzalez.

“I have reported to Prime Minister Hon. Dr. Denzil Douglas that all students from St. Kitts and Nevis in Cuba are safe. We have had communication from the Ministry of Human Resources and the Ministry of Foreign Affairs, indicating that all are well,” said Ambassador Gonzalez.

She said the St. Kitts and Nevis students as well as all other students studying in Cuba from around the world were moved to safety as well as the hundreds of Cubans who were in the direct path of the hurricane.

On Sunday, St. Kitts and Nevis Prime Minister Hon. Dr. Denzil L. Douglas expressed concern on the safety of the Federation’s students studying in Cuba following the passage of Hurricane Paloma and directed the Ministry of Foreign Affairs to seek information from the Cuban Embassy on the safety of the students following the latest pounding by Hurricane Paloma on Saturday.

On Wednesday, Cuban President, His Excellency Raul Castro said the Caribbean island sustained losses worth more than US$10 billion in three hurricanes that have devastated the island in the past three months.

Between Aug 9 and Nov 9, Cuba was battered by three powerful hurricanes, Gustav, Ike and Paloma that left a trail of destruction across the island, killing scores of people, destroying thousands of cattle head, razing homes and inundating standing crops and agricultural lands.

Cuban officials earlier had estimated that losses from the first two hurricanes “” Gustav, which devastated western Cuba Aug 9, and Ike, which crossed the island from east to west Sep 7-9 “” were more than $8.6 billion.

Gustav and Ike destroyed or damaged half a million homes, according to official figures.