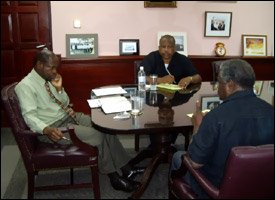 Mr. Archibald, accompanied by local businessman, Mr. Carlton Dupont, made the suggestion during a meeting with St. Kitts and Nevis Prime Minister Hon. Dr. Denzil L. Douglas, just hours after expressing their concern on the level of crime in the twin-island Federation.

Prime Minister Douglas thanked Mr. Archibald and Mr. Dupont for expressing their concern, which is similar to those of hundreds of citizens on a very serious matter.

Mr. Dupont commended Prime Minister Douglas for issuing invitations to political parties and other stakeholders to attend a soon to be convened consultation on crime during last Tuesday’s “Ask the Prime Minister” radio programme on ZIZ Radio and Sugar City Rock.

Mr. Dupont said he also agreed with the Prime Minister’s plea for parents to assumed a greater role in the raising their children.

He also spoke of the need for closer and better collaboration between the police, Customs and other law enforcement agencies in curbing the entry of illegal firearm into the Federation and for the strengthening of the of the police force.

Mr. Archibald expressed concern for the teenagers and the need to identify and implement solutions to stem the negative influences.

“Pass the enabling law to make it mandatory for students leaving school at 16 years and cannot get a job to be mandated to continue their education at a re-orientation camp to save them from the destiny that they will overcome,” said Mr. Archibald to Prime Minister Douglas.

“This law will force them to respect other human beings, to be creative, to avoid use of weapons, to play together, to eat together and to lean a different and positive attitude, to learn a trade, a skill and self-esteem,” Mr. Archibald said.

Several other issues related to crime, youth and parenting were also discussed.
Prime Minister Douglas informed Mr. Archibald and Mr. Dupont that with the receipt of the Report on Crime from the FBI official and the sharing of the report with the Cabinet of the Nevis Island Administration, the Federal Government will continue to roll out a programme of consultation with all stakeholders including political parties.

Dr. Douglas also disclosed during the meeting that his Cabinet has been discussing several initiatives over the past weeks including a Skills Programme for unemployed persons.