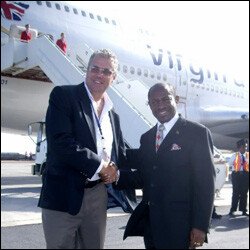 “My government continues to hold talks with officials of Air France and Virgin Atlantic on starting scheduled flights into the Robert L. Bradshaw International Airport,” said Prime Minister, who also disclosed discussions were also continuing on further development and expansion of the airport to meet the increased passenger and aircraft traffic expected in the next few years.

“I was able to do a quick tour of parts of St. Kitts brief and am satisfied that with the rapid development that I see in St. Kitts, there is the potential for Virgin Atlantic to look more seriously at St. Kitts,” said Symes, who said he is based in Barbados.