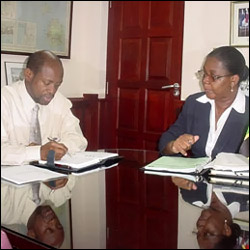 A three-person delegation will represent Federation Government of St. Kitts and Nevis at the 38th Annual Meeting of the Board of Governors of the Barbados-based Caribbean Development Bank (CDB).

Caribbean Heads of Government, Ministers of Finance and Development, Governors of Central Banks, as well as representatives from international organizations and Canadian financial institutions will attend the meeting at the World Trade and Convention Centre in Halifax, Nova Scotia, Canada from May 26th to May 29th.

Also attending the meeting are Chairman of the Development Bank of St. Kitts and Nevis, Mr. Elvis Newton and the General Manager, Mr. Lenworth Harris.

Governor of the St. Kitts-based Eastern Caribbean Central Bank (ECCB), Sir K. Dwight Venner is leading the delegation from the sub-regional financial institution to the meeting.

Canada’s Minister of Foreign Affairs and the Bank’s Governor for Canada, Hon. Maxime Bernier will chair the Board of Governors meeting.

Canada’s Secretary of State Hon. Helena Guergis will also be attending and will play a prominent role in the Bank’s meeting, as well as other events.

Prior to the Governor’ meeting, CDB’s Board of Directors will meet on Monday, May 26, 2008. The Procedures Committee of the Board of Governors will meet on Tuesday, May 27, followed by the Twenty-Fifth Annual Meeting of the Contributors to the Special Development Fund (SDF).

The Government of Canada will sponsor additional key events before and after the Bank’s official meeting.

Sponsored by the Canadian International Development Agency, the Department of Foreign Affairs and International Trade and the Atlantic Canada Opportunities Agency, these events will showcase our longstanding relationship and encourage future collaboration between Canada and the Caribbean.