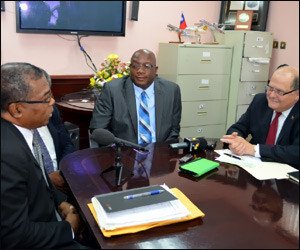 The government of St. Kitts and Nevis is one step closer to delivering on its promise to make a better life for former sugar workers with the acceptance of a $16 million check from the government of Venezuela under the PetroCaribe agreement.

At a brief ceremony in Government Headquarters, Cabinet members and the local press bore witness to the signing and handing over of the check and the signing of an agreement between Prime Minister Dr. the Honourable Timothy Harris and Venezuelan Ambassador His Excellency Bernardo Alvarez Herrera.

Prime Minister Harris explained that the money would be given to former sugar workers.

“We will over the course of the months be pursuing with the government of Venezuela a number of projects that we think would form part of the expectations of support under these particular programmes [PetroCaribe and ALBA],” Prime Minister Harris revealed.  “For now they have readily accepted to provide for us $16 million to cover what we have described as the shortfall in the compensation package to the former sugar workers.”

“The government of Venezuela had in the past been specifically associated with the agenda of support for sugar workers,” Prime Minister Harris explained.  “You will recall for example that they had been involved in the building of homes for some of the former sugar workers.  And they therefore had become interested in assisting the government in meeting this very major policy initiative that we had announced.  Because of their prior engagement in that area, it made it easier for them to appreciate the issues at hand which they had been involved in a number of policy initiatives both in terms of agriculture and specifically to the former sugar workers “¦ this is just the first of several initiatives that we intend to pursue with the government of Venezuela.”

Prime Minister Harris revealed that there would be a special press conference on Thursday to explain how the monetary packages would be distributed.

The leader of the Federation also took the opportunity to thank and commend Minister responsible for Public Infrastructure, Honourable Ian “Patches” Liburd for spearheading the initiatives with PetroCaribe and for putting forward the proposal in question, at the first available meeting.

Minister of State, Honourable Wendy Phipps of the Ministry of Health and Social Development was also acknowledged and thanked for her guidance in the drafting of the proposal of the former sugar workers upgraded compensation package.

Prime Minister Harris requested that Ambassador Herrara convey deepest gratitude to President of Venezuela Nicoas Maduro as well as the Venezuelan Foreign Minister Delcy Rodriquez who attended the swearing in of the government of national unity.

In response, Ambassador Herrara emphasized that the arrangements for the initiative had taken place in a short space of time.

“The last time we met was in Caracas, a week and a half ago, and then we discussed and PM expressed to us how important was this help to the sugar workers,”  the Ambassador revealed.   “And when we start working very hard and in a few days, less than two weeks, we were able to make this proposal a reality.  I would like just to say that this is a moment to tell the importance and the nature of PetroCaribe.  PetroCaribe is an energy agreement between countries based on the vast natural resources that Venezuela possesses.   It has the idea to not only keep important levels of security to countries, particularly countries in the Hemisphere and the Caribbean but also be a tool for economic and social development.  This is why under the umbrella of PetroCaribe we can have these social programmes.  We also have programmes that tend to be more of a productive nature.  The whole idea is to make a balance and to give opportunity, to have energy security, to promote economic and social development and promote regional integration.”