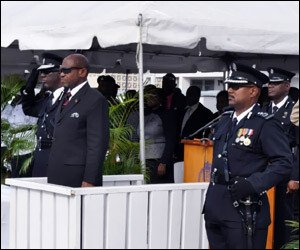 Public confidence in the Royal St. Christopher and Nevis Police Force (RSCNPF) is expected to grow even more with the passage of the Police Complaints Bill in the Federal Parliament on Friday (October 24).

Prime Minister the Right Honourable Dr. Denzil Douglas piloted the Bill through the National Assembly in his capacity as minister responsible for police matters. He noted that the legislation will ensure “the essential parameters of good governance, transparency and the rule of law can be better defined and enhanced.”

“The Bill is providing for the investigation of complaints by an independent commission and this is to be done in an impartial, unprejudiced and at the same time efficient manner,” the Prime Minister explained, adding that this legal framework is in keeping with a modernized police force.

The Police Complaints Commission will be appointed by the minister responsible for police acting on the advice of Cabinet. It will consist of five members including an attorney with more than 10 years experience as well as a retired officer of more than three years, who held the rank of Superintendent of Police or above.

Additionally, the Bill also provides for the establishment of a Complaint Unit within the RSCNPF to be appointed by the Commissioner of Police. It will be responsible for receiving public complaints against an officer, investigating and determining the next course of action. The independent commission will have oversight of any investigation.

Prime Minister Douglas emphasized that the legislation was designed in support of law enforcement.

Attorney General the Honourable Jason Hamilton thanked law enforcement officers, the majority of whom he said “work hard every day” and do their job to the best of their ability. He added that there is nothing to fear from the passage of the legislation as it aims to vindicate and validate just actions in the performance of police duties.

The Attorney General pointed out that the legislation extends to other agency personnel that have been granted police/arrest powers in specific circumstances. These include select members of Her Majesty”â„¢s Customs and Excise Department, St. Kitts-Nevis Defence Force, private investigators, security guards and island constables.

Members of the commission will be appointed for three years with an option to renew after such term has expired.