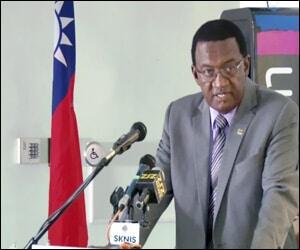 The Honourable Eugene Hamilton, Minister of Health, said establishing a National Health Insurance in St. Kitts and Nevis is a top priority for the Government. The comments were made during a handing over ceremony of IT equipment from Taiwan to the Joseph N. France General Hospital on Wednesday, January 13.

“National Health Insurance to me is a means of high quality, people-centered comprehensive and integrated service in which due attention is paid to the expenditure and revenue of the package of services we provide,” Minister Hamilton said. “There is no viable health insurance without accurate and reliable health promotion information, clinical information and financial information.”

Minister Hamilton made reference to Taiwan’s excellent National Health Insurance, where research showed that 80 percent of the population is fully satisfied. He expressed confidence that St. Kitts and Nevis will reap the same benefits from the use of the IT equipment.

“The task force for our implementation of our National Health Insurance in St. Kitts and Nevis will study your (Taiwan’s) programme,” Minister Hamilton told Resident Ambassador George Gow Wei Chiou of Taiwan, while noting that appropriate studies will also be done on other programs and best practices from countries to assist the successful implementation of the health insurance programme locally.

The minister described the donation as imperative as it represents a step forward.

Also present at the ceremony were the Honourable Wendy Phipps, Senator and Minister of State in the Ministry of Health, the Honourable Vincent Byron, Minister of Communications, Justice and Legal Affairs, His Excellency George Gow Wei Chiou, Andrew Skerritt, Permanent Secretary in the Ministry of Health, other health and IT officials, invited guests and media representatives.