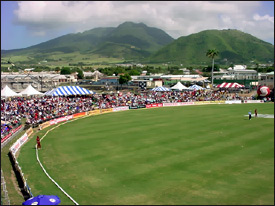 Hundreds of Kittitians and Nevisians as well as cricket enthusiasts from the neighbouring islands are expected to witness the two Digicel One-Day International matches between the West Indies and Australia at the Warner Park Cricket Stadium this weekend.

The first one-day game (4th ODI) here will be played on Friday 4th July and St. Kitts and Nevis Governor General, His Excellency Dr. Sir Cuthbert Sebastian, acting in accordance with the advice of the Cabinet of Prime Minister Hon. Dr. Denzil L. Douglas, has proclaimed the day a public holiday. The 5th ODI – second match here will be played on July 6th.  The West Indies lost the previous three ODI’s.

West Indies captain Chris Gayle, who top scored in the Third Digicel One Day International with 53, had some stinging words of criticism for his middle order batsmen who failed to capitalise on an opening stand of 86 in 17.4 overs.

“I thought myself and Xavier (Marshall who made 35) really started well this morning, the wicket was doing a bit early up but the middle order was a disaster for us again,” Gayle said at the post match presentation ceremony.

“We set it up really well and they didn’t actually carry on,” Gayle observed as his team made a modest 223 in 48 overs and lost by seven wickets as Australia took an unassailable 3-0 lead in the five match Digicel ODI Series with two games to be played in St. Kitts.

“We have done a lot of talks but that is not going to help us at this particular time, we need more action to be taken, it’s up to us as individuals to work out our game,” said Gayle who had said that the batting in the Second Digicel ODI on Friday was a big disappointment. On that occasion the West Indies capitulated to 58 for 6 before eventually getting to 140 for 8 as they chased 204 from 41 overs after a 55 rain interruption forced the use of the Duckworth/Lewis calculations to revise the total. Australia had made 213 for 5 from 50 overs on a difficult pitch.

“We are looking forward to the two games (in St Kitts on July 4th and 6th), we still have a lot of pride to play for,” the 28 year old left hander said.

Warner Park Cricket Stadium, re-developed as a result of financing by the Governments of the Republic of China on Taiwan and the Federation of St. Kitts and Nevis is the 158th ground to host an ODI in 2006 and the 12th venue to host an ODI in the Caribbean.

The ground also hosted its first Test match, when India played against the West Indies in the third Test of the series in June 2006.