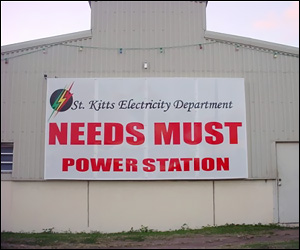 The St. Kitts Electricity Company (SKELEC), in collaboration with Canadian technology company Corinex Communications Corp, announced Tuesday, their successful initial deployment of a pilot site as part of a government mandated initiative to modernize aging power generation and distribution assets, to culminate with an eventual island-wide deployment of nearly 20,000 meters within the next 2 years.

A Vancouver news release said SKELEC was one of several energy stakeholders on the island who realized that continued fossil fuel imports threatened future economic St. Kitts growth, prompting decisive unified action from both the public and private sectors to implement a national smart grid plan that could accelerate economic development.

SKELEC needed a solution that could not only work to address existing problems, but could also fortify and enhance the grid with new features and capabilities. Corinex was approached to provide a next-generation island micro-grid solution that incorporated existing energy infrastructure while allowing for future integration of nascent renewable resources, such as solar farms.

This enables high-speed bidirectional data exchange between the utility’s network operations center and the customer meter, which translates into near-instantaneous feedback for peak shaving operations and optimized load management across the grid.

The utility can now offer cost-effective, differentiated services for individual consumers based on their consumption profiles, while empowering customers to understand their consumption patterns and adjust accordingly to reduce their electricity bills. Businesses such as hotels and resorts stand to benefit by expanding their income-generating activities without fear of electricity service interruptions. There will be no need to install unsightly new infrastructure such as radio towers that would obstruct views of the surrounding areas.

After undergoing a lengthy tendering process that involved a number of internationally renowned technology companies, SKELEC was able to determine that Corinex offered the best solution.

“The Smart Metering Project will enable [us] to improve quality of services for population and provide a reliable energy supply to build new high quality resorts and hotels in the country to bring [in] high-spending clientele. It will also enable integration of renewables and replace dependence on price volatile imported oil,” explained SKELEC CEO Cartwright Farrell. “In order to improve the overall service and solidify electric infrastructure, SKELEC has decided to execute [the] Smart Metering Project.”

“This is good news for workers and families across St. Kitts, as well as for Canadian manufacturers and exporters of telecommunications equipment,” said Ed Fast, Canada’s Minister of International Trade. “Providing the tools and the support needed for Canadian businesses to succeed in global markets is our priority. When Canada’s SMEs export and win contracts around the world, they create jobs and opportunities at home.”

“It is the aim of SKELEC, with Corinex assistance, to offer the residents of St. Kitts first-class electricity service that is safe, reliable and modern.”

This lays the foundation for what should become a showcase smart grid deployment, unprecedented in performance and function, establishing St. Kitts as a technology leader for the entire Caribbean region.

Kittitians can look forward over time to decreased energy costs as cheap and plentiful renewables are incrementally incorporated into the grid, while neighboring Caribbean nations that have yet to implement a smart grid strategy continue to import costly diesel, which is projected to increase in price as crude oil surpasses US $100.00 per barrel.

Countries reliant upon favourable oil prices, such as those guaranteed under the Petrocaribe regime, may soon find themselves susceptible to volatile oil price fluctuations as a result of uncertain political and socioeconomic developments in other parts of the world. The future consequences of present inaction are dire: the International Energy Agency (IEA) predicts that developing countries will need to double their electric power output by 2020 just to satisfy projected demand.

The best solution for addressing future needs across the region is energy infrastructure that employs micro grids. To that end, and to encourage economic development and free market cooperation between Canada and the Caribbean, the Trade Commissioner Service of the Department of Foreign Affairs, Trade and Development Canada (DFATD) is actively promoting Canadian businesses offering sustainable development solutions to countries in the Caribbean and beyond.

Trade Commissioner Tammy Brathwaite, citing the ongoing success of the SKELEC smart meter deployment with Corinex, encourages all Caribbean Small Island Developing States (SIDS) to learn about sustainable developments and trends. “Early investment in smart grid technologies [can] single-handedly elevate [a utility’s] smart grid profile within its own customers and visibility to other countries on the international stage,” she explained.