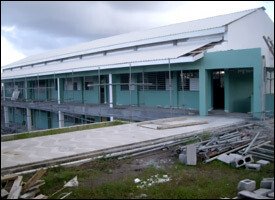 St. Kitts and Nevis has made significant strides in protecting the poor and vulnerable and improving the quality life of the nationals of the twin-island Federation in healthcare and education.

Prime Minister Hon. Dr. Denzil L. Douglas said the Joseph N France General Hospital, which was virtually in tatters when his Labour Party took office in 1995, has been rebuilt and transformed into a modern facility that stands at the centre of a progressive health service, and offers state-of-the-art medical care to the people.

He said that the Pogson Hospital in Sandy Point, which was totally neglected during the administration of the Peoples Action Movement (PAM), is been rebuilt and is near completion.

He said the Pogson Hospital, when it is officially opened this year, will offer a modern, expanded and improved primary and hospital care facilities to the residents of Sandy Point and neighbouring rural villages, and to become a regional centre of excellence in the fight against chronic diseases and HIV and AIDS.

“Since 1995, our education system has been revolutionised. Our schools have been repaired and rehabilitated and our curriculum and education management system has been significantly enhanced as part of a comprehensive Caribbean Development Bank Basic Education Project.

He referred to the present construction of the Saddler’s Secondary School that will not only serve the varied training and educational needs of the nation’s children, but it will also provide life-long learning opportunities for the adults living in Saddlers and neighbouring communities.