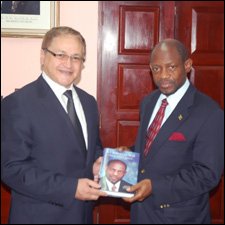 Brazil is to send a technical cooperation mission to St. Kitts and Nevis.

The disclosure has come from that country’s Resident Ambassador in Basseterre, His Excellency Mr. Miguel Magalhaes, who said the South American republic also recognises the imbalance in current trade flows with the Caribbean.

In remarks at the recent signing of the Partial Scope Agreement which gives St. Kitts and Nevis products lower tariffs into the huge Brazilian market, Ambassador Magalhaes said Brazil is to join the Barbados-based Caribbean Development Bank (CDB).

He noted that in 2011, total trade between Brazil and the CARICOM countries reached over 4.5 billion US dollars.

“Brazil is committed to finding ways to mitigate this circumstance. A study was carried out in Brazil and will soon be released on “Opportunities for CARICOM Exports to the Brazilian Market”, which identifies Caribbean products with a potential to expand exports to Brazil,” said the Brazilian diplomat.

He said the Brazilian Government is working to improve air connections between Brazil and Caribbean and there is already a direct flight from SÃ£o Paulo to Barbados and in the 20 months of its existence, the demand has been very high.

According to Ambassador Magalhaes, Brazil has taken initiatives on the financial front.

“During these times of cuts in international aid and contribution to multilateral assistance mechanisms, Brazil has announced that it is joining the Caribbean Development Bank as a non-borrowing member and we will contribute to the Development Fund,” said the Brazilian diplomat.

He said Prime Minister the Rt. Hon. Dr. Denzil L. Douglas was informed that technical cooperation mission will discuss areas in which Brazil can provide assistance, including training and certification to professionals and businesses.

“I believe it is time for St. Kitts and Nevis to expand its horizons and look a bit more to the South. As a developing country and a former colony ourselves, we fully understand what President Lula once called a fascination with the Northern hemisphere. But the fact is that the world is changing. Nowadays, most experts agree, there is a lot more economic potential in the Southern part of the world,” said the Brazilian diplomat.