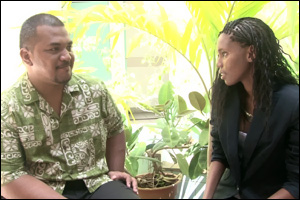 A student exchange programme, sponsored by the European Union (EU), is currently underway to generate ideas for the advancement of the St. Christopher National Trust Museum and the Marshall Islands National Museum.

Natasha Leader, Executive Director of the St. Christopher National Trust Museum stated that the seven week programme will allow students to investigate their surroundings in each of their countries in order to make meaningful decisions as to how the museums can be improved.

“We have right now a student from the Marshall Islands in the Pacific and we will be sending a student to the Marshall Islands for seven weeks. Both students will be at the same territory at the same time for a short while but will spend most of their time independently in order to actually become oriented to a different place, get around by themselves and also interact with a new environment to bring solutions.”

Neidai Franklin, who will be travelling to the Marshall Islands, explained that she will be conducting research on the local arts, textiles and the cultural differences between the two islands. Ms. Franklin added that she was excited about going because she is passionate about history and hopes to become an art historian.  She also encouraged other young persons to get more involved in learning about history.

“I recommend that young people, youth like myself become [members] of the museum because you can learn not only about culture but you can find out more about your own history,” she expressed. “You can also find out more about the island than you think you are aware of and the outside world. For me, this whole exchange programme has opened my mind. We always tend to look just beyond the Caribbean region and the United States but there is so much more out there to explore, see and understand about what else is out there in the world. So many people tend to confine themselves in a box so they do not know what really is going on in the world. So I think that young people should really expand their horizon.”

Kimbar Rilomento, the exchange student from the Marshall Islands, will be doing research and finding solutions to improve the use of technology in museums. He has been looking into the concept of virtual museums which means that persons would be able to view items and documents as if they were actually in the museum.

The national museum has been encouraging exchanges for several years. The last exchange took place in 2007 with Constance Kisook who was instrumental in setting up the independence display at the museum. The last Commonwealth Association of Museums intern was Alexander Graham Heagy, along with Hazel Brooks who were responsible for setting up the museum’s newest exhibit which is called the Worker’s Exhibit.