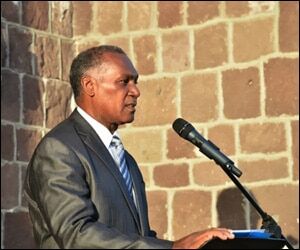 The National Season of Prayer, Fasting and Repentance was launched with a Prayer Rally on Sunday, February 07 at the St. George’s Anglican Church, under the theme “Righteousness Exalteth a Nation”.

The launch was attended by Members of Parliament, Government officials, dignitaries, members of the clergy, and members of various churches in the Federation, nationals and visitors alike.

Premier of Nevis and Minister of Ecclesiastical Affairs, the Honourable Vance Amory, explained the reasons behind the event.

“We in the Government of National Unity decided that we would enlist the churches in a meaningful way, to help us in restoring peace and decency to our country,” said Premier Amory, while explaining that the first order of business in this regard involved meeting with representatives of the St. Kitts Christian Council and the Evangelical Association in May, 2015 to discuss ways in which the church can support the Government and vice-versa.

The Premier noted that over the years the Federation has experienced too many crimes.

“We are all aware of the place that we have come over those last years in which crime and violence have overtaken us and we are subdued on all sides by fear,” he said. “I believe that in discussing with the church, that their great commission to go into the world and preach the gospel, teaching love and those attributes of changing the human heart is what we need in our society today.”

He noted that the church leaders made a commitment to assist wherever necessary.

“The church leaders have committed themselves to using their influence, their training and their command to preach and teach, to help in our schools and communities and to use their significant experience in their own congregations to seek to restore our country to a state of holiness,” said the Minister of Ecclesiastical Affairs. “We are aware that values such as honesty, integrity, forgiveness, peace and love have been frowned upon and destroyed in some cases and I believe that in enlisting the support of the churches that they can help us through prayer to change things for the better and to restore the lost values, help us to mend the breaches which have become so evident in our country to the detriment of all of us.”

He explained that everyone should come together to assist in eradicating crime from society and the Federation on a whole, as crime “knows no political affiliation and does not discriminate.” The premier noted that through fasting in this season of prayer, one can use this avenue to give young people a second chance.

Premier Amory extended thanks to the church ministers for responding to the call for peace in the Federation and assured that the Government will not interfere with the church, as the church has its full support.

The National Season of Prayer, Fasting and Repentance which runs from February 07 to March 19 was organized by the St. Kitts Christian Council and the Evangelical Association.

On Wednesday, February 10, which was Ash Wednesday (Beginning of Lenten Season), there was a Worship and Prayer Service at Independence Square, Basseterre. Monday, February 15 is declared as National Day of Repentance which includes several events, namely, General Assembly in Schools; prayer in churches throughout the day; prayer services in the media; and ending with a National Service of Repentance at the Zion Moravian Church.