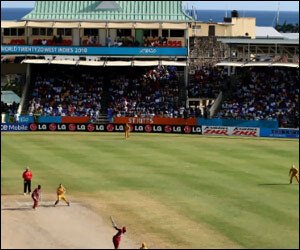 An EC$800,000 grant from the Republic of China (Taiwan) presented to the Ministry of Sports will be used to enhance and upgrade the lighting infrastructure at the Warner Park Football Stadium in St. Kitts.

This gift is timely as the national team prepares for June 11 World Cup Qualifying match against El Salvador.

Minister of Sports, the Honourable Shawn Richards, expressed gratitude to the Government of the Republic of China (Taiwan).

“I am truly thankful that we are here today to share in yet another act of benevolence and commitment to the diplomatic relations and friendship established between the governments of St. Kitts – Nevis and the Republic of China (Taiwan),” Minister Richards stated. “The government of Taiwan has continued to demonstrate their support of the development of sports in our federation.”

He further stressed his government’s stance and commitment to the importance of sports in the federation.

“My government realizes the role of sports in the development of our youth and the redirection of at-risk youth and the promotion of our federation as a premier tourism economic development location,” he said. “My government is also committed to, through sport, the weaving of a fabric of unity in our twin island nation, demonstrated vividly when our nationals forget the difference of political affiliation, social and economic stratification and in a spirit of oneness support and celebrate the accomplishments of our home grown athletes. One such example of accomplishments of excellence is manifested in the successes of our own St. Kitts-Nevis Sugar Boyz.”

Some of the equipment assembly has already commenced by parent company Musco Sport Lighting based in the US and Puerto Rico and items are expected to be on island shortly.