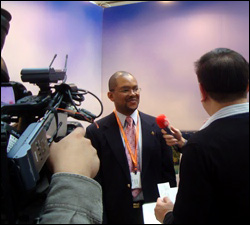 According to Her Excellency Jasmine Huggins, St. Kitts and Nevis’ Resident Ambassador to the Republic of China (Taiwan), “this is the fourth consecutive year that the Federation has exhibited at what has been touted as the largest event of its kind in Asia.”

This year, the main theme for the display was cruise tourism which was quite timely and appropriate, given the recent surge that St. Kitts and Nevis has recently made in this area.  Nonetheless, other aspects of the local tourism product were also highlighted, including, activities such as golf, zip-lining, the Sugar Train and scuba diving; historic sites like Brimstone Hill Fortress; as well as the unique culture and festivals.

As part of the cultural presentation, Kittitian and Nevisian students, who are currently studying in Taiwan, donned clown and masquerade costumes and entertained the thousands of visitors to the booth, by dancing to local soca music.  This, along with the Kittivisian rum punch that was served from the booth offered the patrons a chance to sample the festive spirit of carnival.

This cultural presentation was partly responsible for the enthusiastic interest that the radio and television crews took in the St. Kitts and Nevis booth.  This was recognized by Mr. Abdullah Skerritt, Director of e-Business Operations with the St. Kitts Tourism Authority, who stated that “the level of press coverage ““ both print and broadcast ““ that the destination was afforded at the event, translates into advertizing value that would otherwise have been prohibitive, given our budget.”

Both Ambassador Huggins and Abdullah Skerritt expressed confidence that the destination will benefit from the twin-island state’s presence at the expo.  “We are already in discussions with principles who want to bring tour groups to our shores,” Mr. Skerritt advised.