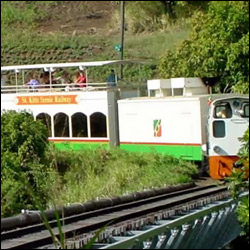 St. Kitts and Nevis which closed its three hundred year-old sugar industry three years ago is reporting success in the implementation of strategies to transform the national economy.

Political Leader of the governing St. Kitts – Nevis Labour Party, Prime Minister Hon. Dr. Denzil L. Douglas told hundreds of Labour Party members and supporters, representatives of the diplomatic corps and business community at his party’s 76th Annual National Conference, that the success of the strategy is quite evident in the economic, social and physical infrastructure, which has been dramatically overhauled and expanded and which has acted as a magnet for foreign direct investment.

Indentifying the various projects aimed at unleashing high-end tourism services, the St. Kitts and Nevis leader referred to the strides in other areas such as financial, information and communication technology and offshore education services, which he said are already delivering substantial social and economic benefits to the people of the federation.

“Our roads and bridges are now among the best in the Caribbean region despite the recent setback. Our telecommunications services are the state-of-the-art and are now much more affordable and competitive and local ownership is now shared because of the new legislative and institutional framework that we have established,” said Dr. Douglas, in his address at the St. Kitts Marriott and Royal Beach Casino.

Dr. Douglas referred to the tattered, “˜dry weather’ facilities at the then JNF General Hospital inherited by the Labour Administration in 1995, which has now been demolished and replaced by modern and enhanced facilities that delivers outstanding accommodation and convenience as well technologically advanced medical care.

“This will be supported by brand-new health care facilities at Pogson Hospital that will not only offer a wide range of medical and health services to the people of Sandy Point and the neighbouring communities, but will also become a regional centre of excellence in the prevention, management and treatment HIV/AIDS and related illnesses,” he told delegates and invited guests.

He said that the comprehensive education system, which has earned international citations and commendations, has been upgraded, expanded and refined, and now has the capacity to provide university level training in a number of subjects, specialised tourism and hospitality training, and  regionally accredited skills training in a range of practical skills of relevance to the development of the Federation.

“Indeed, the entire system is being refocused to ensure that a much higher percentage of our young people successfully complete their secondary education and thereby prepare themselves for further training and education and for making constructive contributions to the national development through effective participation in the workforce or the pursuit of a variety of business ventures here in St. Kitts and Nevis,” said Dr. Douglas.

He said the housing stock has been revolutionised overnight in terms of both quantity and quality, and even more importantly home ownership is no longer the exclusive domain of the rich and powerful.

“Labour has delivered some 2000 plus homes to lower income families in the country over the last decade ““ more than five times the number of houses built by PAM (People’s Action Movement) in the 15 years during which they held office,” said the Prime Minister and Labour Party Leader.

Dr. Douglas noted that his St. Kitts-Nevis Labour Party Administration has empowered thousands of persons through education, employment, entrepreneurship, and creation of a vast array of income-earning opportunities, to acquire their own homes.

“Many of the “˜palaces’ that we see in Frigate Bay, Bird Rock, Mattingley Heights and more recently the Southeast Peninsula as well as in other parts of the country are owned by our own people, many of whom are the grandchildren of slaves and children of former sugar workers who have held tenaciously to the opportunities created by Labour and have lifted themselves out of the pits of depravity to occupy prominent positions in our society as professionals, managers, businessmen and highly paid employees,” noted the Prime Minister.

He emphasised that when the Labour Party assumed office in 1995, the Federation was not ready for the transition from sugar production into services but the Labour Government meticulously and tirelessly laid the foundation to position itself to offer competitive, world class services to people all over the globe.

Labour he stressed understood that even its best efforts to keep sugar afloat indefinitely might not have been enough to withstand the tidal wave of globalisation and trade liberalisation and the Labour Administration therefore proceeded with great haste to build a new economy for the people of St. Kitts and Nevis.