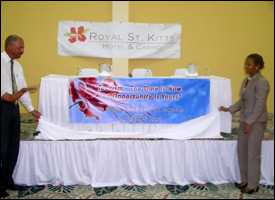 The Tourism Awareness Month now has its slogan for 2008, thanks to the participation of the public in the Tourism Month Slogan Competition. At a brief ceremony held at the Royal St. Kitts Hotel and Casino, the slogan, “Tourism ““ The Time Is Now. The Opportunity, Yours” was unveiled to rapturous applause by the Minister of State of Tourism, Sports and Culture and Mrs. Rosecita Jeffers, CEO of the St. Kitts Tourism Authority. The winning slogan was submitted by Mrs. Sharon Hetherington of Calypso Bay.

In his brief remarks, Minister of State of Tourism, Sports and Culture, Richard Skerritt reflected on the judges’ choice of the Slogan. “I think the judges were moving in the direction of people empowerment and the need for our people to see the industry as an ongoing evolution of opportunities.” He added, “Tourism is a very solid and important sector for the future of our independence. And while we celebrate our independence, our heroes and other things in our community that have allowed us to get to this point in time, this is an attempt to remind people that it is the tourism sector that will be the focal point of wealth creation and improving the quality of life for our people.”

The grand prize was a 2 night stay at the Royal St. Kitts Hotel and Casino, a cruise aboard a Red Sail Sports catamaran, dinner for two at the new Beach House Restaurant and a $200 calling card account from Triple 8 Calling Cards. Vincent Fough and Shaniqua Carey were 1st and 2nd Runners-Up respectively.

The mission of the St. Kitts Tourism Authority is the promotion of St. Kitts in all its major regional and international markets.