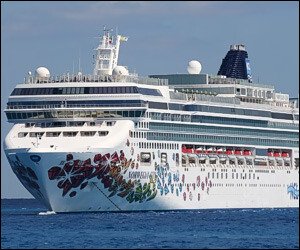 The second of the eleven new cruise ships scheduled to visit St. Kitts – Nevis during the 2014/2015 Cruise Ship Season is in port.

The Norwegian Gem was the newest cruise ship in Norwegian Cruise Line’s fleet until the debut of Norwegian Epic in June 2010.

Construction began on 7 June 2006 at the Meyer Werft Shipyard of Papenburg, Germany.

She was delivered to Norwegian on 1st October 2007. Norwegian promoted the launch of this ship via her own website, “Gem It Girl,” which in addition to providing details about the ship, also prompted previous customers’ of Norwegian to submit an entry to be chosen as her godmother.

As with the rest of Norwegian’s fleet, Norwegian Gem utilizes the “Freestyle” cruising concept, which allows guest to dine in any number of restaurants, in casual attire, at times of their own choosing.