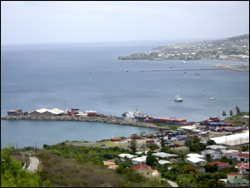 The St. Christopher Air and Sea Ports Authority (SCASPA) has been awarded the Novaport Cup by the Port Management Association of the Caribbean (PMAC).

The Novaport Cup is given to the St. Kitts – Nevis facility for being the most improved performer among regional ports for 2007.

According to PMAC, the St. Christopher Air and Seaports Authority received the award based on the high level of improved efficiency as well as for the implementation of systems to enhance its operations, the training of personnel and profitability.

“This is really a surprise…but we are happy to be recognised for our efforts to improve the efficiency and profitability of our operations in St. Kitts,” Port Manager Mr. Roosevelt Trotman is reported to have said on receiving the Novaport Cup, which is presented annually to the most improved port among PMAC members.

“We have done a lot of work and made some strides over the past two years,” said Trotman.

The award was handed over during the recent 11th annual general meeting of the PMAC which was held in Antigua.

Chairman of the PMAC, Mr. Everton Walters, congratulated the St. Kitts executives and also reported that the meeting in Antigua was successful in bringing together regional executives to discuss the industry.

Among the highlights of the two-day meeting was the signing of memoranda of understanding between PMAC and the Inter-American Committee on Ports (ICP) of the Organisation of American States (OAS), as well as with the Jamaica-based Caribbean Maritime Institute (CMI).

Mr. Walters said the Memorandum of Understanding with the ICP will strengthen initiatives for technical cooperation for the promotion and unification of port development within member states.

He added that the agreement with the CMI was designed to ensure the provision of quality training for port personnel across the region.