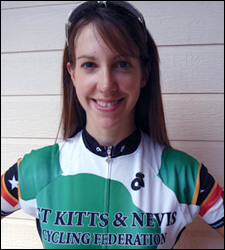 More than 50 bikes will make their way from Madison County to the Caribbean islands of St. Kitts and Nevis this fall, thanks in part to a Colgate alumna’s quest to qualify for the Summer Olympic Games.

Kathryn Bertine’s drive to compete in the 2008 summer Olympics in Beijing is documented in her book, “As Good As Gold: 1 Woman, 9 Sports, 10 Countries, and a 2-Year Quest to Make the Summer Olympics.”

According to Syrcause.com, when she returned to her alma mater last year for a book signing, she explained that she tried a multitude of sports “” including team handball, modern pentathlon and race walking “” before realizing she would have to compete for another country in order to achieve her goal.

The Caribbean island nation of St. Kitts and Nevis accepted her request for dual citizenship. To show her gratitude, Bertine offered to help the country build a women’s cycling programme.

The project sounded like a perfect opportunity to Community Bikes organizer Chuck Fox, who has distributed hundreds of used bicycles to families in need in Madison County and has partnered with the Youth Policy Institute to provide new bikes to the Malawi Children’s Village and the North Malawi Malaria Project in Africa.

“We want to get bikes into the hands of people who need them,” Fox said.

The first set of bikes will be delivered to three elementary schools on the island of Nevis. But Fox hopes that this is just the beginning of the partnership.

“Part of it is to develop a life habit of cycling, for all the health and wellness benefits,” he said. “But if they find a bunch of kids that enjoy riding, they might end up trying to compete.

“The notion that the bikes we send could help one child reach the Olympics is just amazing,” Fox said. “The country is small enough that it is an attainable goal.”

Kathryn Bertine graduated from Colgate University in 1997. Her book is titled, “As Good As Gold: 1 Woman, 9 Sports, 10 Countries, and a 2-Year Quest to Make the Summer Olympics.”

A native of Bronxville, N.Y., she lives in Tucson, AZ.

To learn more about her journey, visit kathrynbertine.com.