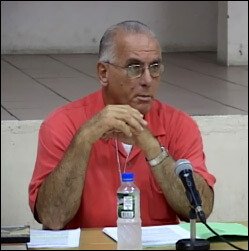 Critical issues relevant to the continued development of St. Kitts and Nevis, and its population, were the subject of a three hour dialogue between Parliamentarian Honourable G. A. Dwyer Astaphan and aspiring parliamentarians on Thursday evening.

The MP was invited by the St. Kitts National Youth Parliament Association (SKANYPA) to interact with its members at an open and frank forum on topics including crime and initiatives implemented to tackle the issue. Focus was given to the impact antisocial activities have on the economy and the image of the country.

The former Minister of National Security gave insight into the varied motives behind criminal acts.

“This process of deterioration and degradation has been nurtured, in no small way, and capitalized upon by persons and entities whose essential focus is gaining wealth and influence,” he stated. “[Some young people] worship drugs, guns, jewelry, clothing, CDs, DVD, radio, television and so forth.”

While invoking a poetic license, Honourable Astaphan described these as “powerrizers, halucinizers, equalizers and tranquilizers of youth. They also [generate] big business, especially in a society indoctrinated into showing consumerism, fashion and superficiality,” he stressed.

During the meeting held at the McKnight Community Center, MP Astaphan also referred to the breakdown of the family social structure and supporting community mechanisms – such as the caring neighbour – and said that this trend must be reversed. He detailed that as a member of Government, he and his Cabinet colleagues understood the need to address the issue before it spiraled out of control.

“The truth is that I am so hard on crime that I want to stamp it out, even before it happens. While I am for cure, I am also for prevention,” he emphasized. “While I am for fortifying our national security apparatus and our judicial and penal arrangement, I am also fully convinced that they will add up to naught in the absence of appropriate and sustained social interventions.

“There are reasons why people behave the way they do and no effort to curb antisocial behaviour can be successful if it fails to analyze and address the causation of the behaviour.”

To achieve this result, the former minister regularly interacted with gang members and encouraged private sector agencies to partner with his ministry in offering training and gainful experiences to discourage persons from turning to crime. He also established a mentorship programme in schools to expose children to upstanding male role models within the communities in an attempt to minimize negative influences.

After the opening presentation, a Q&A segment ensued with the audience which also included a number of community residents, and the Constituency Representative for the area.

SKANYPA’s First Vice President, Melissa Bryant told SKNIS that the meeting was extremely productive and described the insight of MP Astaphan as “very good.” She noted that her organization is prepared to continue its part in deterring youth from antisocial activities. After hearing of the ongoing initiatives implemented by former minister Astaphan, the young lady said she was certain that with greater collaboration with its social partners, criminal elements in society can be reduced.

Ms. Bryant challenged the community to play a greater part towards achieving this goal.