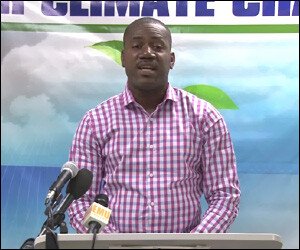 Minister responsible for Education and UNESCO Honourable Shawn Richards has placed the onus of changing society’s attitude toward the care of the environment on the youth.

This was noted at the launching ceremony of the UNESCO Youth Ambassadors for Climate Change, on May 08.  The minister noted that youth are “best positioned” to take on this task.

“We have to use the youth to reach their peers with this critical message of climate change and sustainable development,” Minister Richards stated.  “It is in this regard that the government of St. Kitts and Nevis applauds the work of UNESCO in deploying expertise and competencies in policy formulation on subjects to do with climate change, among other initiatives for the development of the federation, the Caribbean and all small island developing states.”

Minister Richards also emphasized that in order for behavior to change there has to be a change in attitude and even a shift in values when it came to caring for the environment.

“This Youth Ambassadors for Climate Change project brings in sharp focus, in a practical way, the value of education as an integral mechanism in preparing our society for adaptation to climate change,” Minister Richards noted.  “Through this project, we will achieve adaptive capacity not only for current generations but also for our future generations.”

Similarly, National Commission for UNESCO Secretary General Antonio Maynard revealed that the project would be initially implemented for 10 months with the expressed desire that it “fulfills one of the mandates of the Ministry of Education” and becomes a part of the formal curriculum.  He expressed pride in Randel Thompson, a former member of the UNESCO Small Islands Voice (SIV) youth arm who is now a Geographic Information Systems (GIS) Officer at the Fisheries Department.  Mr. Thompson decided to go into that field because of his exposure to environmental issues in SIV.

The UNESCO Secretary General challenged the Youth Ambassadors for Climate Change to carry out their assigned role.

“I want to challenge the young persons here, the students ““ we see you as ambassadors for St. Kitts and of course for climate change and you have the opportunity to travel the world, make a positive impact and come back and make a contribution,” he said.

The Youth Ambassadors for Climate Change is divided into six modules of work and includes field work in the UNESCO St. Mary’s Biosphere Reserve in Keys-Cayon area.