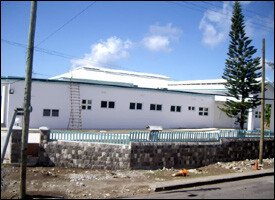 The official opening of the reconstructed Pogson Hospital in Sandy Point is to take place in a few weeks.

This was disclosed Tuesday by St. Kitts and Nevis Prime Minister Hon. Dr. Denzil L. Douglas.
“This new and improved Pogson Hospital will offer to the people it was built to serve, a state-of-the-art labour and delivery suite; a radiology unit; a pharmacy; a dental unit; and a medical services unit,” said Prime Minister Douglas during his weekly “Ask the Prime Minister,” radio programme.

Dr. Douglas, who gave no firm date for the opening said the new facility will contain a fully-equipped health center, with treatment, examination, and counseling rooms so that the people of Sandy Point and the surrounding areas could have access to these services easily and conveniently, without having to travel to Basseterre.

The facility which will serve the residents of Sandy Point and the surrounding areas is expected to cost some EC$6 million.

“My Government is fully committed to the continued social development of our people. Healthcare is one of the areas that my St. Kitts-Nevis Labour Government has concentrated upon over the last 12 to 13 years that we have been in office. We felt that it was only important to rebuild the Joseph N. France General Hospital, when it was destroyed by hurricane, but also to rebuild the Pogson Hospital,” said Prime Minister Hon. Dr. Denzil L. Douglas, during a tour of the facility in January last year.

“The people of Sandy Point and the people of St. Paul’s, Newton Ground, Half Way Tree, Godwin Ghaut, Middle Island and Old Road, who would be served by this facility would recognise an increase in the number of services that would be provided here,” said Dr. Douglas  at the time.

On Tuesday Dr. Douglas used the opportunity to pay tribute to the various health ministers who have played a role in the completion of the project.

“Permit me to pay tribute to the various health ministers who have served to realise this dream for the people of Sandy Point and the people of St. Kitts and Nevis. I want to commend the current Minister of Health, Hon. Rupert Herbert, the former Minister of Health, Dr. the Hon. Earl Asim Martin and the important and impressive role that former Minister, Mrs. Jacinth Henry-Martin provided when she was the Parliamentary Representative for the area,” said Dr. Douglas.