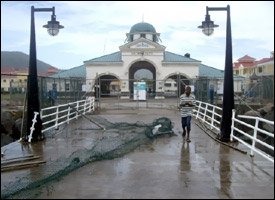 The recent redesigning of the berthing facility at Port Zante and the revetment of the bulkhead by the Government were factors in securing the tourism infrastructure.

The cruise ship facility at Port Zante was not damaged as a result of the powerful waves that pounded the coastline during the passage of Hurricane Omar on Thursday morning.

The St. Kitts and Nevis Prime Minister Hon. Dr. Denzil L. Douglas was happy there was no damage to the cruise ship pier.

“There is no doubt the redesigning of the berthing facility and the revetment of the bulkhead, by Government secured this very important infrastructure,” said Dr. Douglas, who is also Minister of Tourism.

He said that continuing high seas have “regrettably” caused the cancellation of the “MV Marco Polo” Cruise Ship which was scheduled to visit Port Zante on Friday.

“This is somewhat of a setback, but with God’s help, we can look forward to the arrival of the MV Carnival Miracle next Saturday, because our cruise infrastructure remains fully intact,” said Dr. Douglas.

It was redesigned and millions of dollars was spent in a revetment project which saw huge boulders place both on the eastern and western sections to protect the bulkhead.

Prime Minister Douglas said that several boats, including two ferries were able to find safe harbour in the improved Marina at Port Zante.

“However, two inter-island ferries ran aground and there are reports that two fishermen’s piers in Charlestown Nevis were damaged and several fishermen’s vessels also suffered damage,” said Prime Minister Douglas.

He said that he was aware that the Four Seasons hotel evacuated all of its guests Wednesday morning and that the hotel has suffered some storm surge damages.

“A full assessment is being carried out and I am certain a full report will be submitted subsequently. There have been no reports of significant damage at any other hotel and most of them are already open for business,” said the Prime Minister.