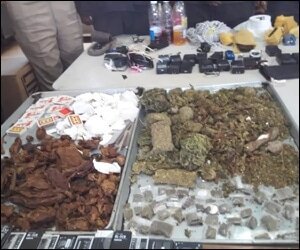 In the wake of a massive discovery of prohibited items inside Her Majesty’s (HMS) Prison in St. Kitts, Superintendent of Prisons, Junie Hodge, said that “it will not be business as usual” and “that anyone found in breach of the prison regulations will be seriously dealt with according to the law.”

The tough-talking superintendent said that all persons visiting the prison onward will be subject to a search, from the superintendent down. He said that there will be an investigation to determine how the items found their way into the prison. Also, he spoke about the installation of closed -circuit television (CCTV) to help with security.

Her Majesty’s Prison was closed to visitors from the general public for twenty one (21) days commencing the 2nd February, 2016 until the 22nd February, 2016, to facilitate the transition period of the new superintendent of prisons and to do an audit of the security compound.