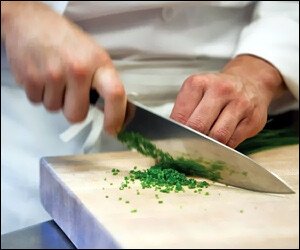 Four high school students, two from the Verchilds High School and two from the Washington Archibald High School (WAHS), were given the opportunity to showcase their cooking skills during the annual Youth Month High School Chef Competition held at the Tyrell Williams Primary School in Old Road on Friday, November 27.

Mrs. Diane Dunrod ““ Francis, Senior Youth Officer responsible for the cook-off, explained that the competition is to help the students sharpen their culinary skills.

“It is to give them that sense of ability where they can do things without their teachers and to display what they would have done to the judges,” she said.

WAHS emerged winners for the third time since its inauguration in 2011 and both students and teacher expressed how overwhelmed they felt.

Mrs. Glasgow, Food and Nutrition and Home Economics Teacher at WAHS, said she is proud that her students won, adding that she is very happy and quite confident in the students. Ms. Stephens of the Verchilds High echoed similar sentiments and said that her students did an excellent job.

The winners, Oksanna Paris and Keeanna Ible, said that they are very proud to have emerged the winners.

“I wasn’t confident in myself,” said Ms. Parris. “But apparently we are capable of a lot more and I hope that we can do well in the regional competition in Barbados.”

Shayonce Browne and Jana Thompson from the Verchilds High School stated that even though they did not win the competition, they are very proud of themselves, especially knowing that this is their first competition since the cook-off commenced. They added that the competition has pushed them to do better in the future.

“I feel quite excellent because many people did not have the courage to come out and participate and produce all that good food,” said Shayonce Browne. “Today we are here and we have done it. This is what we always wanted to do since we were small, and we feel confident that we entered this competition.”

The young chefs were placed in groups of two and given a mystery box, in which various cooking items were placed. Students from the WAHS stated that they were disappointed, as the basic stuff such as flour and butter were missing from the box. However, the Verchilds High participants said that the mystery box did not deter them, as they had already put possible ideas together and substituted for various groceries or items in the box.

This year’s competition was different as cash prizes were awarded to the winners and second runners up. The winning school received EC$1000. EC$500 will go directly to the Home Management Department and the remainder will be shared equally among the participants. The second runners up received EC$800.