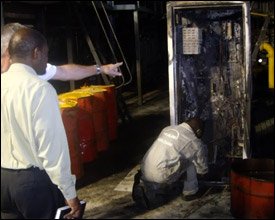 Minister of Public Works and Utilities Dr. the Hon. Earl Asim Martin is to officially inform electricity consumers on St. Kitts of the end to load shedding following a fire which damaged the two largest generators at the Needsmust Power Plant over a month ago.

Load-shedding was implemented five weeks ago after an early morning fire damaged the Mirlees 12MB 430 and the 8MB 430 generators and completely burnt the control panel causing an island wide blackout.

Electricity was quickly restored to some areas and limited load shedding was implemented until other generators were up and running and mobile generators were imported and installed to provide the capacity needed to return the situation to normalcy and reliability.