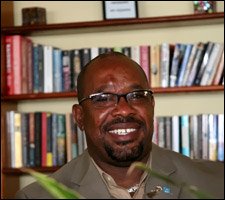 St. Lucia’s Minister of Physical Development, Urban Renewal, Housing, Environment and Local Government Mr. Richard Frederick said Thursday that his island had much to learn from the Nevis geothermal experience.

The Minister, who was on Nevis to attend the 1st Eastern Caribbean Geothermal Conference hosted by the Nevis Island Administration in conjunction with other partners, said the island’s government had taken a gigantic step with respect to the implementation of what most of the islands saw as impossibility.

“Hats off to the people of Nevis, who will be the beneficiary ultimately of such a very, very good project. [Permanent Secretary Mr. Ernie Stapleton and Minister of Natural Resources and Environment] Mr. Powell, they have worked quite hard, it is quite evident and they have brought to fruition something I am looking forward to implement in St. Lucia,” he said.

Mr. Frederick said the fact that the NIA had come on board in 2008 with the idea to make the island sell sufficient with geothermal electricity by 2010 was in his view a remarkable achievement.

“There is absolutely no way, anyone on this globe can see this as not being a tremendous achievement and let me reiterate hats off to them,” he said. He explained that although St. Lucia wanted to move in the same direction as Nevis had, it was not possible at this time.

“We started much earlier than you guys but I must say again you all had the wherewithal to move on and move on very, very swiftly. In the case of St. Lucia, we need to take a page from the books of the Nevis government. We needed to enact legislation and grant licences as opposed to exclusivity and that is where the difficulty is.

“So as long as we as a people and government can get out of this legal entanglement, what we can do is to follow the very same pattern and the chronology that Nevis has followed in achieving the kind of success that they have achieved today,” he said.

Mr. Frederick noted that it was not right, in this modern era, to monopolise any kind of supply or exploration of any resource that would be of significant benefit to a country.

The St. Lucian Minister described the three-day landmark geothermal conference as an eye opener which would be of great benefit to his government and people.

“It has set my trend of thinking in a direction that I am going to take the bull by the horns and do whatever is absolutely necessary, to ensure that we get not necessarily on par with Nevis in quick time but that we get our ball rolling”¦There is absolutely no disadvantage whatsoever in going geothermal for the production of electricity,” he said.