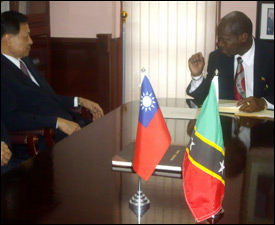 The Federation of St. Kitts and Nevis and the Republic of China on Taiwan can look forward to the strengthening of their relationship in the years ahead.

“President Ma Ying-jeou sends his best regards to you and also assures you of his appreciation for you and your government’s strong support to my country and is looking forward to closer ties between our two countries,” said Dr. Lai, who is also Taiwan’s Chief Justice and President of the Judicial Yuan.

Accepting the message, Prime Minister Douglas noted that the Republic of China on Taiwan was the first nation to establish diplomatic relations with St. Kitts and Nevis on the date of its independence, 19th September 1983.

“To the People of St. Kitts and Nevis and to my Government, Taiwan holds a special place in the hearts. We are extremely grateful for the developments in the relationship over the years. It has moved from strength to strength. The Pride, the Development, the Progress and the Success which characterises our independence for 25 years are shared proudly with the Government and the people of Taiwan,” said Dr. Douglas.

The Presidential Envoy quickly gave the assurance “that this kind of relationship will continue for decades to come.”

“We appreciate your confidence in the longevity of our relationship and that is the way we in St. Kitts and Nevis feel as well and that is why we can say with a tremendous amount of pride, that we are truly two brotherly countries,” said Dr. Douglas, who informed the Presidential Envoy that his St. Kitts-Nevis Labour Party Government “at this time in its development, as part of the transformation of the economy is concentrating on the development and the strengthening of the nation’s human resource.

“Taiwan has been very helpful in our policy of training and skills acquisition in various areas,” said Prime Minister Douglas. There are nearly 25 St. Kitts and Nevis students studying at universities in Taiwan and two civil servants on training programmes.

The Presidential Delegation also attended other official events marking the 25th Anniversary of Independence including the Ceremonial Parade at the Football Stadium, Warner Park and the Silver Jubilee Reception at Government House hosted by His Excellency the Governor General, Dr. Sir Cuthbert Sebastian.