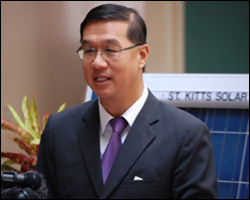 Resident Ambassador of the Republic of China (Taiwan) to the Federation of St. Kitts and Nevis, His Excellency Miguel Tsao said the electrification of Government Headquarters by solar energy signifies the commitment his Asian nation places on the everlasting friendship with the twin-island Federation and as a partner and ally – to provide new technology where possible.

Delivering remarks at a ceremony to activate the solar panels mounted on the roof of Government Headquarters to the national grid, Ambassador Tsao noted that the project comes following a visit to Taiwan in march by Prime Minister the Rt. Hon. Dr. Denzil L. Douglas and Minister of Energy, the Hon. Dr. Asim Martin, when they visited a solar power plant and renewable energy factory.

“It reflects and demonstrates the emphasis and importance of their visit today during this ceremony. Certainly fruit has been borne of their tangible visit to my country,” said the top Taiwan diplomat, who noted the Right Honourable Prime Minister’s energy policy which is to achieve 60% energy generation from green energy sources by 2015.

“This project is consistent with that objective, and we hope what we do today can redound to benefit all for tomorrow. A popular Taiwanese saying is: “If we don’t do today, we will regret tomorrow” and also as the saying goes we will “throw out a sprat to catch a whale.”

Ambassador Tsao noted that due to limited roof space for solar panels, the project is meant to be a demonstration project and is also a stepping stone.

The Taiwanese Ambassador also informed the fathering that solar power will also be incorporated into the Newton Ground Demonstration Farm project ““ whose design Prime Minister Dr. Douglas have had a hand in shaping.

“Again, I applaud your vision and passion in always putting your people’s interest first,” said Ambassador Tsao and used the opportunity to express thanks to the Permanent Secretary in the Ministry of Energy, Mr. Lenrick Lake for the support given to the bilateral cooperation projects.

He also thanked Madam Tai-Hui Wu, Commissioner of Taiwanese Overseas Compatriot Affairs and owner of Solar Power Industries Inc. – one of the most thriving growing company in the USA ““ ceiling fan market.