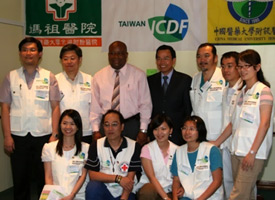 Residents of Nevis would this week receive free medical care through the collaborative efforts of the Nevis Island Administration’s (NIA) Ministry of Health and the Taiwan Mobile Medical Mission (TMMM).

In a brief ceremony to mark the four-day medical initiative held at the Administrative Department of the Alexandra Hospital, on July 14, 2008, Minister of Health in the NIA Hon. Hensley Daniel recorded his gratitude to the TMMM for its generosity.

“We in Nevis, in the government of which I’m apart, we have raised the bar and are working to keep health on a priority. Being in government over the last two years, matters relating to resources for health have taken up quite a bit of our attention and so we want to say to the Taiwanese that we shall find [partner] with our medical professionals and they will advise us and that you can expect from us new ways in which we can collaborate and cooperate towards the resolution of health challenges in Nevis,” Mr. Daniel said.

He spoke of other possible collaborative efforts that could be facilitated between the TMMM and the NIA.

“Outside of a one off visit every year, you can expect from us some sort of formal proposal in which we can address, whether its issues of Human Resource Development, whether its issues of specialised care, we certainly would want to advance the relationship to something which would be done to the benefit of the wider public,” he said.

The Minister also used the opportunity to appeal to the general public to get involved in the medical profession.

“We need more nurses and more doctors homegrown so that in time and over time we might be able to do a similar mission as the Taiwanese are doing.  That is the long term view.

“I want to say to the people quite frankly, that Taiwan can do this because they have enough of their people sufficiently trained that they can make their services available internationally.  We must be seen to be doing something similar. I trust that the interaction with the medical professionals from Taiwan will inspire some of our local people to join the medical profession particularly in the areas of nursing and medicine,” Minister Daniel said.

Taiwanese Ambassador Mr. Rong Chuan-Wu of the Embassy of the Republic of China in St. Kitts and Nevis recorded his support of the sessions and encouraged Nevisians to take advantage of the week’s services.

“This is the second time for ICDF Mobile Medical Mission (to) visit Nevis.  Upon the experience of last year, we suggested to ICDF that this year they should enlarge their service to Nevis.  During the four day service they will not only provide medical service but most important is that to have seminars for any opportunity to exchange skills and technology with their counterparts in the Alexandra Hospital,” he said.

The TMMM team consists of senior nurses, neurologists, a cardiologist, a dentist, an infection specialist, a transitional medicine specialist and a pharmacist.