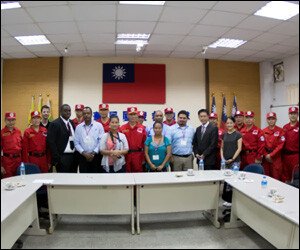 One month after a media visit to the Republic of China (Taiwan), Grell Browne of the St. Kitts and Nevis Information Service still speaks passionately about the experience and in particular his visit to several Non-Governmental Organizations (NGOs) based in Taiwan.

Browne, was a part of a media group comprised of persons from Belize, St. Vincent and the Grenadines, Nauru, Kirabati and Swaziland. For one week the group was exposed to various government, civic and cultural activities.

“The visit to the various NGO’s stood out for me. It gave me insight into a trait I’ve noticed with the Taiwanese as individuals and as a nation possess their service to their communities, nation and partners.  It is a thread that runs very deep in their character, and it is evident in their government’s relationship with ours.”

The group, he said,  visited the Taiwan Root Medical Peace Corps, the Noordhoff Craniofacial Foundation and the Taiwan S.A.R Headquarters all NGOs that serve not only at home in  (Taiwan) but are also very active abroad. Mr Browne noted their activity briefs were impressive.

The Taiwan Root Medical Peace Corps (TRMPC) is a twenty year private, non-sectarian organization dedicated to improving quality of life through provision of medical services and health education and was founded by Dr. Chi-Chun Liu, the organization overview explained that TRMPC joins talented medical personnel with enthusiastic volunteers to form a medical service group, and through missions, they continue to serve the rural communities in Taiwan and around the world providing medical treatment free of cost.

“Love makes whole”, putting smiles on the faces of children and adults with cleft pallete is the vision of the Noordhoff Craniofacial Foundation in Taipei, which was another NGO visited by the group.  According to Browne, “in its unassuming offices, a dedicated staff of volunteers was eager to speak to us and share their stories. They spoke of local children who are now confident to play outside, children from Indonesia, Afghanistan, the Philippines and other countries whose lives have been transformed and who have benefited from the foundation’s services.”  He said the group was left with a lasting impression that this foundation was about more than fixing the physical, it was a holistic approach, and that was clearly summed up in the following quote from the founder Dr. Samuel Noordhoof. “Changing a child’s appearance goes far beyond patching up a hole, to impact his entire life.  It promotes confidence, gratitude to society, and helps him better understand love and how to share love with others when he grows up,” Browne said.

With hundreds of volunteers, International Headquarters S.A.R. Taiwan has ninety-seven local branches in Taiwan and two international search and rescue units (known as the International Search and Rescue Operations Taiwan). The organization has responded to and provided relief missions during earthquakes, floods and other disasters in places like Nepal, Malaysia, Japan, and in the region during the earthquake in El Salvador.  Members of the organization include emergency response specialists and dedicated volunteers, some are retired military personnel, academics, and persons from community groups.  After providing a show of capabilities with various rappelling and other techniques, a brief of the group’s equipment and operations was presented.  This organization he said really underscored the passion for volunteerism, during their brief, it was highlighted that many of the members in addition to paying a significant membership fee, also buy their own equipment and fund their own participation in relief efforts.

Commenting on the tours, Browne said, “What was most impressive and interesting about all the groups, in addition to their passion for service, was that they did not receive nor do they solicit any financial governmental support.  All funding for their work comes from donations, there is no active solicitation for donations as well, and they are all meeting their mandates.”