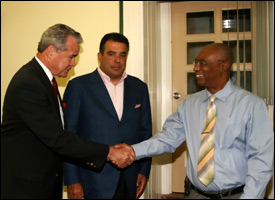 Director General and Chief Executive Officer of the Caribbean Hotel and Tourism Association (CHTA) Mr. Alec Sanguinetti, praised Nevis‘ decision to target high end tourism markets and said it was the right thing to do. He commended Premier and Minister of Tourism Hon. Joseph Parry for the move at his Bath Plain office, when a delegation from the Association visited Nevis on September 29, 2008.

“You are absolutely right in targeting the high end market for your visitor situation because that market, Sir, is the least susceptible to the changes in the market place particularly when we have economic challenges,” he said.

While Mr. Parry thanked the delegation for its visit to Nevis, he described their discussions as “very interesting”. The topics ranged from geothermal, training assistance, the airline situation and how they could work together to market tourism in St. Kitts and Nevis and the Caribbean.

The Premier said he was certain that in spite of the difficulties faced by the industry at this time, the islands of the Caribbean would prevail as they had done in the past and the tourism industry would continue to grow from strength to strength.

President of the CHTA Mr. Enrique De Marchena Kaluche said the delegation had been very impressed with Premier Parry’s report on what was to come for Nevis, not only of the interest in the upscale market by several hotel chains on the island but in the success that hotels like the Four Seasons Resort has had on the island and the small hotels that have been successful here over the years.

He said too, that the conference for small hotels in the Caribbean, slated for October 01-03, in St. Kitts, would provide an opportunity to discuss the incentives for the hotel industry, the airline situation and its effects on business on Nevis and St. Kitts and the provision of training for people involved in the tourism industry.

Meantime, Manager of the St. Kitts and Nevis Hotel and Tourism Association Mr. Michael Head, said they were all excited about the prospects that the conference would bring to the Federation.

“We are sure that it’s going to be a great success we have a good number of delegates coming from all over the Caribbean. We are really looking forward to helping the small hotelier that does not have the benefit of the large organisations behind them to run their establishments and we know that it’s going to be a large benefit to your hoteliers in Nevis as well,” he said.