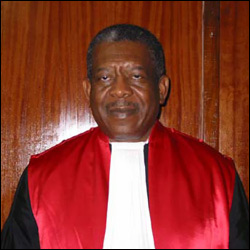 The tenure of Kittitian-born jurist, Sir Dennis Byron, as one the several permanent judges serving on the United Nations war crimes tribunal on Rwanda has been extended.

Sir Dennis, former Chief Justice of the Eastern Caribbean Appeals Court is the lone Caribbean luminary on the tribunal.

The United Nations Security Council has extended the tenure of the judges serving on the war crimes tribunal set up to deal with the 1994 genocide in Rwanda, so as to ensure that all remaining cases can be completed by the deadline set for the court’s work.

Under its Completion Strategy, the International Criminal Tribunal for Rwanda (ICTR), which is based in the Tanzanian town of Arusha, is supposed to finish all of its trials, excluding appeals, by December 2008. All work is scheduled to be completed by 2010.

In a unanimously adopted resolution, the Council voiced its expectation that the extension of judges’ terms of office “will enhance the effectiveness of trial proceedings and contribute towards ensuring the implementation of the Completion Strategy.”

The terms of permanent judges Mehmet GÃ¼ney (Turkey) and AndrÃ©sia Vaz (Senegal), who serve on the Appeals Chamber, were extended until 31 December 2010.

In addition, the Council extended until 31 December 2009, the terms of office of several ad litem judges who have not yet been appointed to serve at the Tribunal.

The Council created the ICTR in November 1994 to prosecute people responsible for genocide and other serious violations of international humanitarian law committed in Rwanda that year. Some 800,000 Tutsis and moderate Hutus were murdered, mostly by machete, in just 100 days.