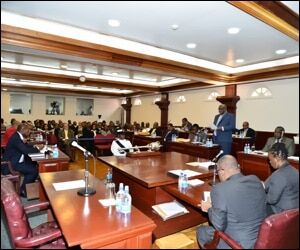 The Tenure of Office of Prime Minister Bill, 2015, is due to get its second and third reading in the National Assembly of St. Kitts and Nevis shortly.

On Wednesday’s (February 17) edition of “Working for You” Deputy Prime Minister, Honourable Shawn Richards, said the Government of National Unity intends to follow through with its promise to pass legislation to limit a person serving as Prime Minister to two terms.

He explained that the rationale was to allow other qualified candidates an opportunity to bring fresh ideas to move the country forward and to promote good governance.

“We have right here within St. Kitts and Nevis and elsewhere in the Caribbean and the world the tendency for persons to get into government and to begin to feel like the government, the country belongs to that particular individual, rather than that individual being a servant of the people,” the deputy prime minister said.

He added that the Federal Constitution bestows a large amount of power to the holder of the Prime Minister and term limits serve as a tool for democracy.