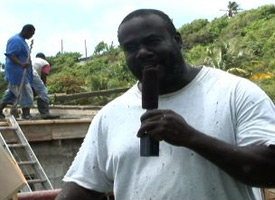 Training Coordinator of the Metal Industries Company Ltd. (MIC) in Trinidad Mr. Dean Smart, voiced satisfaction with the progress of 17 Nevisian trainees who had been facilitated by the Nevis Island Administration (NIA) at his institution for three months earlier this year. They pursued training in various technical fields, as part of the Administration’s plan to develop and empower the youths on the island.

The MIC Official, who visited Nevis as a follow up exercise to evaluate the trainees work on Nevis, spoke to the Department of Information in Charlestown, following his field visits.

“I am very happy to report that the employers and the employees are very happy with what they [trainees] are doing. From the employee’s point of view, the general report is that these trainees have come back with renewed enthusiasm and effort and willingness to make contributions to whatever they are involved in whether it’s the construction industry or the auto mechanic area,” he said.

Contractor Mr. Eric Brookes also registered his satisfaction with a trainee who was in his employ. He said prior to his departure, he had encouraged the trainee to look at the training he would receive as a golden opportunity for personal development.

“When the Minister approached me and asked me if I had somebody who I would like to send, I sat down and I talk to him and I asked him to make the best of it because it was a golden opportunity for any young man who wanted to develop himself,” he said.

Meantime, Permanent Secretary in the Ministry of Social Development Mr. Alsted Pemberton who was instrumental in the implementation of the project explained that all the trainees had received job placement both in the private and public sectors since their return.

He said the Ministry had also received reports from employers about the satisfactory performance of the trainees.

“Most of their employers are very much satisfied with the change of attitude and the work ethics of the persons who have returned from Trinidad. As a mater of fact, we are now being bombarded with persons who actually want to go to Trinidad to participate in this particular project and other projects,” he said.

Mr. Pemberton indicated that the NIA was preparing to send more persons for training in Trinidad in similar areas or where ever else it was available, as part of the Administration’s continued plan to educate and develop the island’s human resource, in particular the youth.