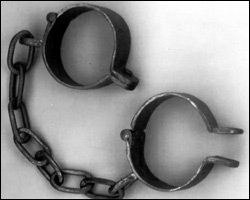 An Example of Handcuffs Used On Slaves

The long anticipated meeting of the UNESCO National Scientific Slave Route Committee took place recently at the Ministry of Education Annex to begin the critical work of raising awareness about the Atlantic Slave Trade, its impact and its legacy towards future development.

Minister responsible for UNESCO Affairs Honourable Nigel Carty introduced members of the Committee and commissioned the intersectoral body to hasten the process of bridging the gap between Slavery and the existing National and International experience.

Among topics discussed were the Research and Documentation on Inventory of Slave Sites in St. Kitts and Nevis; Production of a Cultural Tourism Map and Local Black History Text Books; as well as the Launching of a Booklet and Training Workshop for Teachers.

Secretary General of the National Commission for UNESCO, Antonio Maynard expressed his pleasure that the organization’s priority areas which include, that of building cultural links and using history as a tool for better understanding and world peace, was being pursued locally by means of the Slave Route Project.

Mahlon Goma, Director of Government Communications and Chair of the Lecture Series and Consultations Sub Committee also made reference to the timeliness of the Project, noting that 2011 was proclaimed International Year for People of African Descent by the United Nations.

UNESCO materials circulated during the meeting described the Committee’s activities as “raising some of the most burning issues in today’s world, namely human rights, the building of identities, citizenship, the sharing of resources and cultural pluralism.”

The members of the National Committee will be appointed in the first instance for a four (4) year period. Some of the key roles of the Committee are to ensure an objective and consensual approach to the Slave Route issues and serve in an advisory capacity to the UNESCO National Commission.

Dr. Ken Ballentyne was chosen as the Chairperson while Halstead Byron of Nevis was selected as the Deputy Chairperson and Marlene Phillips Lee was nominated as the Rapporteur and Head of the Public Relations Sub-Committee.

The ultimate mandate of the Committee is the creation of a Monument to the Slave Trade in memory of the Ancestors, which would foster a greater sense of awareness and attract locals and visitors alike, thus enhancing cultural tourism.

The Slave Route Project is a culmination of a previous initiative implemented by the local UNESCO agency which was designed to break the silence on the issue of the Slave Trade and Slavery in the twin-island Federation.

A National Public Launch is planned for early June.