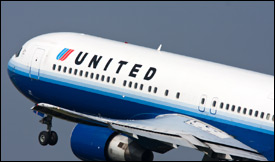 By David Benoit
The Wall Street Journal
[From MSN.Com]

UAL Corp.’s United Airlines is doubling the fee it now charges for passengers who check a second bag on domestic flights as major carriers look for ways to recoup some of the soaring costs hitting the airline industry.

Boosting the fee to $50 is a first for U.S. carriers and the move comes seven months after the airline was the first to enact a $25 fee on a second checked bag. The increased fee is effective on tickets bought starting Tuesday for travel on or after Nov. 10. Like the original rate, it doesn’t apply to customers in business or first class, or on international flights.

The increase is the latest step for air carriers that have watched the price of fuel soar and have had to cut back on flights and employees as well as begin charging for services once seen as complimentary in the business. Fuel costs have come down markedly the past several months, but fees are continuing to be piled on. Continental Airlines Inc. earlier this month became one of the last major carriers to enact a $15 fee on a first checked bag.

Chicago-based United has also been among the most aggressive in leading fare increases this year.

The International Air Transport Association warned earlier this month that the airline industry as a whole could post losses of $5.2 billion in 2008 if crude oil stays at $113 a barrel for the rest of the year.

The global airline trade body that represents about 230 full-service airlines also said 2009 economic growth is expected to be weaker than 2008, but expansion remains “relatively” strong in many emerging markets. IATA expects 2009 losses of $4.1 billion in the airline industry and a fuel bill of $223 billion if crude oil stays at $110 a barrel.