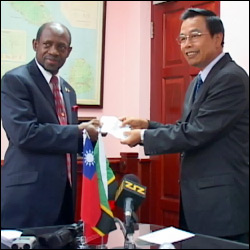 Plans for the upgrade of the sporting facilities in Half Way Tree and Challengers will significantly enhance community and athletic development for residents.

This was the underlying message at a brief ceremony at the Office of the Prime Minister on Wednesday. At the event, Taiwanese Ambassador His Excellency Rong Chuan Wu presented Prime Minister Hon. Dr. Denzil Douglas with two cheques for the necessary construction work at the facilities. US $284,000.00 was donated for use at the Half Way Tree facility, while US $115,000.00 was allocated to Challengers.

Ambassador Wu noted that the donations represent his country’s “humble contribution [to] the progression of the infrastructural [development] in St. Kitts and Nevis.” He explained that since assuming duties a few months ago, there have been important discussions regarding increased cooperation on various ventures, particularly sports and agriculture.

Prime Minister Douglas thanked the Ambassador for his close collaboration with the Government and people of St. Kitts and Nevis in realizing their dreams and aspirations.

“I would like you to convey to your distinguished President, my personal regards and that of the people of the [Federation] for his continued support for policies and programmes even though most of them were [agreed to] … before he took office a few years ago,” said the St. Kitts and Nevis leader. “These two cheques will give the young people of Half Way Tree [and] Challengers the opportunity to build their sporting skills so that they can use their pastime in a worthwhile way.”

The Prime Minister highlighted that persons in the community such as the well known basketballer Glen “˜Ghost’ Phillip can make use of the new facilities to enhance his work with young people and help to mould positive role models. Prime Minister Douglas also reiterated his Government’s policy to use sports as a developmental tool to offer positive experiences for citizens, particularly young people.

The construction work will be carried out by local companies and will be supervised by the Public Works Department (PWD). George Gilbert of PWD told SKNIS that a main stand will be constructed at the Challenger’s Sporting Complex and new bathroom facilities and the addition of a commentator’s booth will add to the comfort of spectators and teams during activities. Plans are also being finalized as to the upgrade work to be done at Half Way Tree.