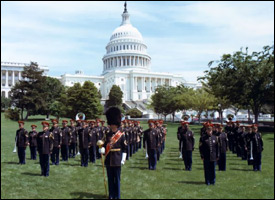 The band, which is also regarded as the Florida Governor’s Band entertained scores of on-lookers during the luncheon period at Independence Square.

The recital attracted scores of on-lookers including passers-by and employees on their lunch break.

The visiting band is guest of the St. Kitts-Nevis Defence Force Band and will appear during the Ceremonial Parade on Friday 19th September to mark the 25th Anniversary of Independence.